Most people know wholegrains are better for you. Along with lowering your risk of cardiovascular disease, type 2 diabetes, obesity and some cancers; latest research has established that wholegrains can also help to lower your risk of and reduce hypertension (high blood pressure) potentially decreasing the need for medication.

Hypertension is defined as a systolic blood pressure of 140mmHg or higher or a diastolic blood pressure of 90mmHg or higher. A leading risk factor for heart disease, hypertension tends to develop with age and is estimated to affect over 2 million Australians. High dietary sodium intake is just one of the many major risk factors for hypertension together with physical inactivity, smoking, overweight or obesity and alcohol consumption.

The Health Professionals Follow Up Study of over 50,000 US males found a similar association, with those eating the most wholegrains having nearly a 20% reduction in risk of hypertension compared to those eating the least wholegrains. This inverse association between wholegrain intake and risk of hypertension was evident independent of sodium intake. This finding is important since grain-based foods such as bread and breakfast cereals are coming under increasing ‘fire’ from health professionals for their contribution to sodium intakes.

Eating less sodium doesn’t mean cutting out foods like bread and breakfast cereal. National dietary surveys in both adults and children show that grain-based foods are important sources of essential macro and micro- nutrients to the diets of Australians, even though they contribute to sodium intake. In the recent National Children’s Nutrition & Physical Activity Survey, as much as half of the total sodium intake from grain-based foods came from less desirable products like biscuits, cakes and takeaway option, highlighting the importance of strategies to reduce sodium contribution from non-core foods.

Choosing healthier grain-based food options can help lower the amount of sodium we eat. Australian research published this year by Webster and colleagues found cereals and cereal products, particularly breakfast cereals, cereal bars, pasta and noodles, to be amongst the lowest sodium foods. Processed meats, sauces and spreads were the highest in sodium.

Many large manufacturers of popular grain-based foods in Australia have reduced the sodium content of their products over the past decade or more by an average of 25% in the quest to further reduce sodium content of foods available within the Australian food supply. Manufacturers are committed to continue long-term sodium reduction efforts slowly and safely where technically feasible, to maintain consumer acceptability and taste expectations, so grain-based foods can continue to be enjoyed every day by Australians of all ages. 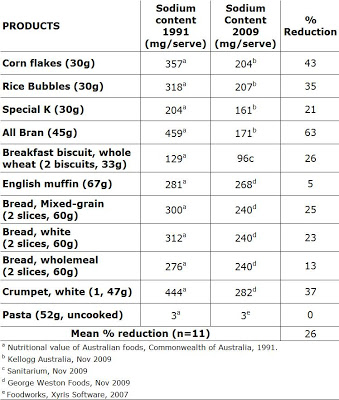