Some people are calling for low-carbohydrate diets to be recommended for people with diabetes but what does the evidence show? Dr Alan Barclay APD, GI Foundation Chief Scientific Officer, looks at the issue.

Type 2 diabetes is increasing rapidly around the globe, due to a large number of factors including our ageing population, decreased physical activity and changes to the foods we eat and drink, amongst many others. While all factors are undoubtedly important, food and nutrition seem to gain a disproportionate amount of attention and generate the most debate. Hardly a week goes by without a new “diet” that self-proclaims it will help people prevent or manage their diabetes better than all preceding diets. Food faddism not only creates confusion and angst for people with diabetes, it also inadvertently affects their families, friends and carers who they share their food with. Low carbohydrate diets are becoming the latest fad, having last been popular in the 1970’s.

To help put healthy eating into perspective, the American Diabetes Association(1) has crafted a number of food and nutrition management goals that summarise all of the main points that need to be considered about healthy eating for diabetes:

2) Prevent, or at least slow, the rate of development of the chronic complications of diabetes by modifying food and nutrient intakes and lifestyle (e.g., physical activity, drinking, sleep, smoking habits, etc…)

While points 1 and 2 are self-evident and the focus of most health professionals that work with people with diabetes, points 3 and 4 are arguably just as important, as ultimately they determine how well an individual will be adhere to a dietary regimen in the long-term.

The American Diabetes Association(1), Canadian Diabetes Association(5) and Diabetes UK(6) have all recently conducted independent systematic reviews of the scientific evidence for the management of diabetes and are all in agreement that there is no evidence for strict macronutrient recommendations for people with diabetes. Instead, there are a variety of healthy eating patterns that may be suitable, based on the individual’s personal and cultural preferences and willingness to change. These may include, but are not limited to Mediterranean style, vegetarian/vegan, low-fat and low-carbohydrate patterns of eating(1).

Systematic reviews and meta-analyses(7) have shown that over the medium-term, all of these different patterns of eating can lead to decreases in HbA1c between 0.12-0.47% points, with low-carbohydrate diets being the least effective (0.12% reduction) and Mediterranean style (0.47% reduction) and vegetarian (0.39% reduction)(8) being the most effective. Unfortunately no long-term (> 2 years) studies have been published to-date.

Dietary patterns with widely differing carbohydrate composition may produce similar outcomes due to differences in glycemic index (GI), glycemic load (GL) and insulin responses. It’s important to note that while the amount and type of carbohydrate are the most powerful predictors of the effect of foods on blood glucose(10) and insulin levels(11), protein and fat also have an independent effect(12;13).

Glycemic index values are frequently found on the labels of carbohydrate-containing foods in Australia (e.g. foods with the GI Symbol (see below) and online and total carbohydrate is a mandatory component of the Nutrition Information panel, so people with diabetes can easily calculate the glycemic load (GL = GI ÍCarbohydrate per serve ÷ 100) of commonly consumed foods and beverages. 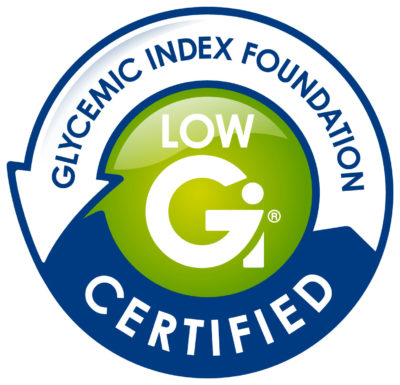 The best way to use the GI is to swap from regular high GI to low GI alternatives within a food group, and this approach also typically identifies the lower GL choices. The insulin response of a food is highly correlated with its glycemic load(14) and for common foods and meals may be used as a surrogate at present. Table 1 lists commonly consumed low GI foods in Australia.

Reducing the amount of carbohydrate is therefore simply one method of reducing blood glucose and insulin levels, but it is not the only way, nor necessarily the best way – that depends on the individual. Every person with diabetes should see an Accredited Practicing Dietitian for personalised advice.